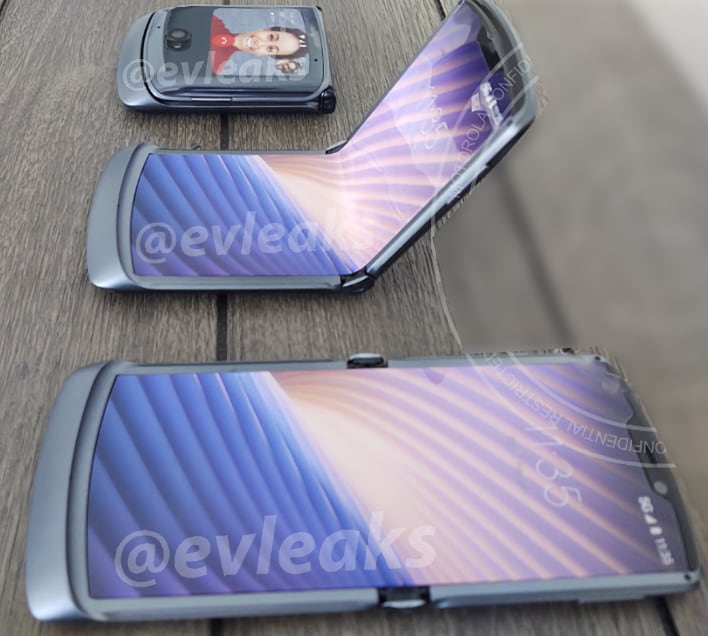 We’re a little over two weeks away from the launch of the Motorola Razr 5G, and we’re beginning to see a greater influx of images and speculation on the device. On the images front, today we’re getting our best look as the Razr 5G yet courtesy of notorious gadget leaker Evan Blass.

Blass has obtained images of the Razr 5G, which show the device with the display closed, halfway open, and fully opened. With just this one image, we can tell quite a bit about the smartphone. For starters, it appears that the hump around the main camera is now larger and that the display notch is a little bit shallower.

More importantly, however, is that the prominent chin at the bottom of the smartphone is a lot smaller and less pronounced, smoothly integrated into the chassis. We can also see that the fingerprint sensor has been removed from the chin, so it’s either no located within the power button or near the bottom of the folding display panel – we’ll probably have to wait until September to find out for sure.

If that wasn’t enough, Blass has also posted a gif of the Razr 5G which gives us a 360-view of the smartphone with its primary display both opened and closed.

As we can see from the images, the overall form-factor of the Razr 5G hasn’t changed much from the original, but there are plenty of little tweaks which should make this a much better overall smartphone. We’re hoping, however, that Motorola is able to make some much-needed changes to the creaky hinge mechanism in the original, which didn’t exactly exude quality (especially for a device that is priced well over $1,000).