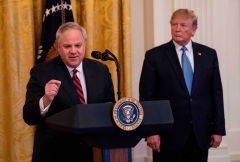 (CNSNews.com) – A task force formed by D.C. Mayor Muriel Bowser is recommending that federal monuments and memorials in the District, including the Washington Monument and the Jefferson Memorial, be removed, relocated or renamed.

In an interview with Fox News’ “The Story with Martha MacCallum,” Bernhardt called the task force’s recommendations “simply nutty.”

“My first thought is that no one, no one will be removing or renaming the Washington Monument or the Jefferson Memorial. None of that is going to happen. It’s just simply nutty, to be frank,” the secretary said. 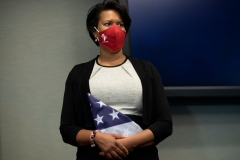 The DC Faces report concluded that 70 percent of federal monuments and memorials in Washington, D.C. were named after white men, many of whom were not District residents.

Among the federal monuments and memorials listed were:

The White House also said that Bower’s “irresponsible recommendation will go nowhere,” which led the mayor to revise its proposal to focus only on sites under local control.

The task force took the following factors into consideration when making its recommendations:

1. Participation in slavery – did research and evidence find a history of enslaving other humans, or otherwise supporting the institution of slavery?

2. Involvement in systemic racism – did research and evidence find the namesake serving as an author of policy, legislation or actions that suppressed persons of color and women?

3. Support for oppression – did research and evidence find the namesake endorsed and participated in the oppression of persons color and/or women?

4. Involvement in supremacist agenda – did research and evidence suggest that the namesake was a member of any supremacist organization?

5. Violation of District human rights laws – did research and evidence find the namesake committed a violation of the DC Human Right Act, in whole or part, including discrimination against protected traits such as age, religion, sexual orientation, gender identity and natural origin?

Bernhardt said that the people honored by federal monuments and memorials in the nation’s capital are “great individuals” who did “great things” and no one said that each of them is “a perfect human being.”

“Let’s take a step back into reality for a minute and recognize that each of these great individuals did great things. No one is saying that each of these individuals was a perfect human being. I think that would be hard to say, but I will say this about each monument. Each monument was carefully deliberated upon, carefully placed on our nation’s mall,” the secretary said.

“The Jefferson Memorial specifically was advocated by Franklin Delano Roosevelt, and he was really the primary driver behind the creation of that wonderful memorial, and as you walk into it and you see the preamble to the Declaration of Independence and other great things, I think that gives you a great sense of what American exceptionalism is about,” he said.

As CNSNews.com previously reported, Trump signed an executive order in July to establish a “National Garden of American Heroes,” described as “a vast outdoor park that will feature the statues of the greatest Americans to ever live.”

Fox News host Martha Maccallum asked about the status of the National Garden of Heroes.

“First off, that is a fantastic question, and I really appreciate it because we’ve done something with the task force that the president set up on July 3rd. We have reached out to 50 governors, to 1,900 county commissioners as we’ve looked at various sites, and I was able to provide the president a report of recommended sites,” he said.

“But on top of that we asked these folks for the number — for recommendations of the heroes and we have literally received hundreds of recommendations for exceptional Americans who could be placed in a Garden of Heroes, and we are excited about that,” the secretary said.